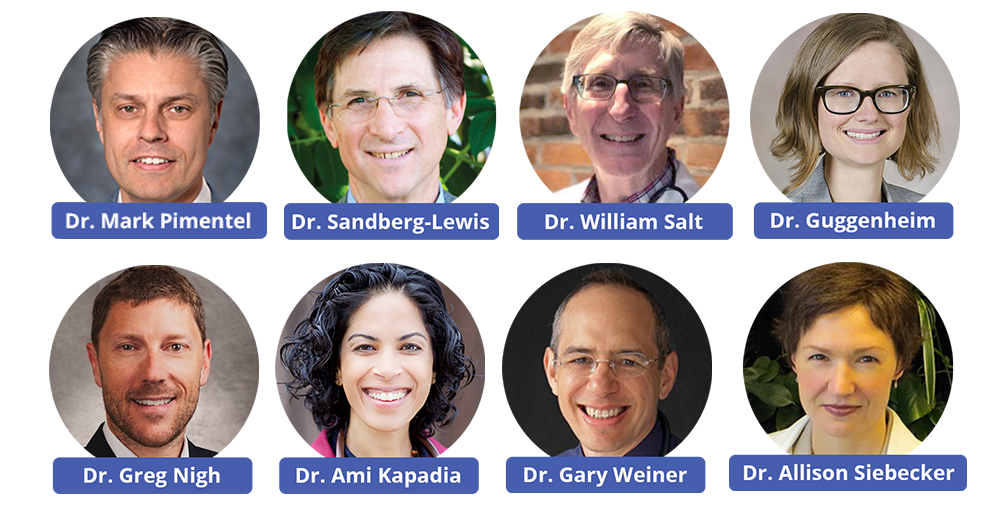 BONUS MASTERCLASSES included when you purchase!

Enjoy these Video Sneak Peeks from each Masterclass...

Dr. Pimentel is one of the worlds leading SIBO researchers and doctors. Learn his latest discoveries from his research on Hydrogen Sulfide, SIBO and post-infectious IBS.

We've been waiting to hear what he's been up to, and now you can hear it from him directly. His last SIBO SOS™ Masterclass sold out with rave reviews and we’re thrilled to have him back.

Prokinetics 101: What's in the Expert's Toolkit

Prokinetics are a very helpful class of medicine with both natural and pharmaceutical options, that many practitioners weren’t trained in, and many patients aren’t offered. While they are an essential (and often underutilized) part of SIBO treatment, did you know that prokinetics are used for many other diseases that affect digestion as well as symptomatic relief for multiple digestive symptoms such as acid reflux, nausea, bloating and constipation?  Join Dr. Siebecker, one of the top SIBO specialists in the world, as she shares how this underutilized class of drugs and formulas help relieve digestive symptoms.

Got Mold?  How Mold-Related Illness & How it Impacts SIBO

Dr. Kapadia has an extensive protocol for dealing with the most difficult cases. She is a functional medicine practitioner and a specialist in environmental medicine. Her expertise in chronic conditions and mold exposure is invaluable. Patients with SIBO, other GI symptoms and autoimmune illnesses whose symptoms do not respond to typical protocols must consider the potential role of mold.

Discover if your diagnosis is actually correct or if symptoms are actually caused by associated conditions like …. Celiac disease, Mast Cell Disorder/Histamine, Colitis, or GERD.

Hydrogen Sulfide and SIBO: ThePotential Cause of SIBO

In this Masterclass, Dr. Nigh reveals: What does it mean if you get a flatline on a SIBO breath test? Are you’re in the clear? Or do you have a type of bacteria overgrowth that isn’t yet detectable by today’s SIBO tests?

Dr. Nigh’s view is that the overgrowth of hydrogen sulfide bacteria is the body’s way of trying to compensate for something — but what?

Joint Hypermobility Syndromes: An important underlying cause of recurrent SIBO

Is there such a thing as being too Flexible? Most people never heard about Ehler’s Danlos Syndrome, but it could be causing a series of unusual symptoms, especially for people with SIBO. People who are super flexible may have this condition that causes organs to move around freely inside the body. Learn the risk factors that are common causes of SIBO — and the best treatment options that relieve symptoms fast.

The Thyroid, MMC, SIBO Connection: What to Test and How to Treat it

It’s shocking! Many experts are talking about the gut and SIBO, but most don’t realize the connection between the thyroid and SIBO. This Masterclass is essential for anyone treating or dealing with SIBO, Hashimoto’s, and hormone imbalance symptoms like fatigue, sensitivity to cold, depression, and impaired memory. For a good many SIBO patients, this is the big missing piece — and why prokinetics alone are often not enough.

Dr. Sandberg-Lewis is the grand master of Naturopathic Gastroenterology, practicing for 33 years and counting, and was the Gastroenterology teacher of Dr. Siebecker, Dr. Weiner and Dr. Guggenheim. Learn from a teacher’s teacher on some of the least talked about reasons SIBO and other digestive disorders remain chronic.

Are you suffering from SIBO that won't clear even with good treatment? Or, did you get rid of your SIBO only for it to come back despite pro-kinetic therapy? Learn about one of the main causes of difficult to treat SIBO, Lyme disease. Yes, that's correct. Lyme disease is extremely common. Well over 300,000 people a year are being diagnosed in the US alone!

The Lyme-SIBO masterclass is a MUST LISTEN TO class so you can learn if it is likely if you have Lyme disease, how to get properly tested for it and treat it. If you have Lyme disease, SIBO will not go away until you work on the Lyme disease and other co-existing factors. This is a rare opportunity to have access to Dr. Tom Messinger, a recognized expert in the field of Lyme disease. Listen to discover if this is the true underlying cause of many of your health complaints.

The Low-Sulfur Diet For SIBO Success

Maria Zilka has been a Nutrition Therapy Practitioner for ten years. She’s also a certified GAPS practitioner. Maria specializes in customizing diets for all her patients with chronic diseases, and helping with their implementation. One of Maria’s specialties is thorough patient education. Based in the Pacific northwest, Maria’s unique and personalized approach to nutritional healing has made her one of the most sought after “food-as-medicine” professionals in the country.

In this Masterclass, Maria Zilka will cover:

Why is this Masterclass Extravaganza different?

There’s no need to travel to get life-changing insights from the best SIBO experts. This event has all the benefits of a health conference (yes, they are a thing and they are a huge help!), with none of the travel hassles or expenses. If your symptoms flare when you travel, this is a great opportunity this is to participate from the comfort of your home. (PLUS you don't have to worry about a cat/dog-sitter!)

During the free access window, watch your favorite SIBO experts share their best insights and advice on causes, protocols, tests, and more.

And, if you decide to "take the plunge" and purchase the Masterclass Extravaganza recordings for only $99 (that's more than 50% savings!), you'll get THREE free bonus classes:

The Q&A portion is the best part. Get answers for those elusive SIBO mysteries you’ve been trying to crack. Rapid information exchange = rapid transformation!

Are You On The Right Track?
Learn What Works From SIBO Experts

Experts at your Finger Tips

Practical, cutting-edge, up-to-date information on the most relevant and aggravating SIBO topics to give you the right skills to manage symptoms and causes. The classes are taught by top practitioners in the field.

More About Who You'll Be Learning From

Learn from the best. Taught by an eclectic group of SIBO experts.

Dr. Pimentel is Professor of Medicine, Executive Director, active researcher in numerous clinical studies, and he is published in the most esteemed medical journals. Dr. Pimentel has been invited to present his groundbreaking medical discoveries around the world.

Dr. Kapadia combines holistic and functional medicine with traditional and complementary therapies. She has a special interest in digestive disorders, (IBS, GERD, etc.) and autoimmune disease — and the role of food allergy and environmental toxins in these conditions.

A revolution in recognition, diagnosis, and treatment of IBS and SIBO is happening. Gastroenterologist, Dr. Salt is one of the few experts paving the way. He has over 40 years of clinical practice and teaching experience and has authored several books.

Dr. Greg Nigh is a Naturopath with a Masters in Science and Oriental Medicine. Alongside his passion for researching and implementing alternative cancer therapies, he is a prolific author, researcher, and featured presenter at professional medical conferences around the country.

Transforming his own health through diet motivated Dr. Weiner to change from a successful career as writer and producer to a career in medicine. With over twenty years of clinical experience, Dr. Weiner writes and lectures frequently to professionals on IBD, SIBO, IBS, and the Elemental Diet.

Dr. Steven Sandberg-Lewis has been a practicing naturopathic physician for forty years. For 33 years, he has been an advanced gastroenterology professor at one of the nation’s top naturopathic schools, National University of Natural Medicine. Complex and unresolved GI conditions comprise his clinical focus.

Dr. Guggenheim is a Naturopath who became the go-to provider for patients with complex symptoms in many systems. She noticed that many patients had undiagnosed hypermobile connective tissue diseases (Ehlers-Danlos Syndrome), which is now her passion.

“Queen of SIBO” Dr. Siebecker is a naturopathic physician, award-winning author, clinician and educator, whose integrative curriculum and protocols, along with her free educational website have been instrumental in modern Small Intestine Bacterial Overgrowth treatment globally.

Shivan’s personal journey with SIBO changed her life. Now more than ever, she wants to give others the opportunity to experience what she created for herself — less suffering and a healthy future.

Prior to becoming an ND, Dr. Messinger was a Registered Nurse for 23 years, spending most of his career working in inner-city Emergency Trauma Centers. Founder and Clinic Director of Portland Natural Medicine in Oregon, where he specializes in the diagnosis and treatment of tick-borne diseases, chronic infections, and digestive issues. He utilizes integrative medicine, herbs, diet, detoxification strategies, ozone therapy, neural therapy, homeopathy, and stress reduction techniques to help reduce toxin burden, strengthen vitality, and promote restoration of health.

Maria Zilka received her Nutrition Therapist certification in 2008 and has been working since that time in collaboration with Dr. Nigh, responsible for patient education and implementation of a wide range of therapeutic diets used with patients of Immersion Health. Maria is one of the most experienced and knowledgeable practitioners in the country regarding all aspects of the calorie restricted ketogenic diet and its implementation with cancer patients. In addition to that, Maria literally wrote the cookbook on implementation of the Low Sulfur Protocol that she and Dr. Nigh developed and have used to great success with hundreds of patients.

Gary Stapleton draws from an extensive career in commercial healthcare. After many years in the healthcare arena, he launched Aerodiagnostics™ Lab, which provides the highest level of diagnostic accuracy and customer service for patients and clinicians. The only laboratory offering innovative and unique access to non-invasive hydrogen/methane breath testing. Gary is a true SIBO hero.

Who are these Masterclasses for?

Patients who need SIBO relief now Some people with SIBO, IBS, and underlying conditions will be able to feel better faster than others. Why? It’s because they’ve armed themselves with an education and learned what to do.

Practitioners who want to go from “dabbling in SIBO treatment” to a SIBO pro. At the end of the series, you’ll be able to better implement protocols and treatments for your SIBO and IBS patients, no matter what specialty you’re in. Increase your confidence and ability to answer your patients’ questions — and most importantly — your ability to help them. Get the foundation to offer them the best alternative and/or conventional treatments.

Bonus when you purchase any Masterclass

If you’ve ever wondered exactly which tests to take and when (for SIBO or otherwise), which treatment recommendations to follow, and what your very next step should be, this comprehensive course gives you the foundation for successful remission.

INCLUDED WHEN YOU PURCHASE ANY MASTERCLASS ABOVE!

Recap of What You Get
Instant Access to the notes, recordings, transcripts!

Get information and inspiration — from experts.

Love to skim or take notes? Transcripts make it easy to find what you need.

Class notes, outlines, and other exclusive material so you get the most from each session.

This comprehensive course gives you the foundation for successful remission.

THANK YOU TO OUR SPONSORS

This Website and all content is for educational purposes only and is NOT intended to diagnose, treat, cure, or prevent any disease or psychological disorder, not does it replace the 1-on-1 relationship with your primary care physician. Always consult your physician or other qualified healthcare provider with your questions about any medical condition and before you start or begin using any diet, dietary supplement, herbal remedies, or other health program. By using our website and participating in our summits, offers, or trainings, you agree to our Privacy Policy, Terms, Condition of Use, and Disclaimers.